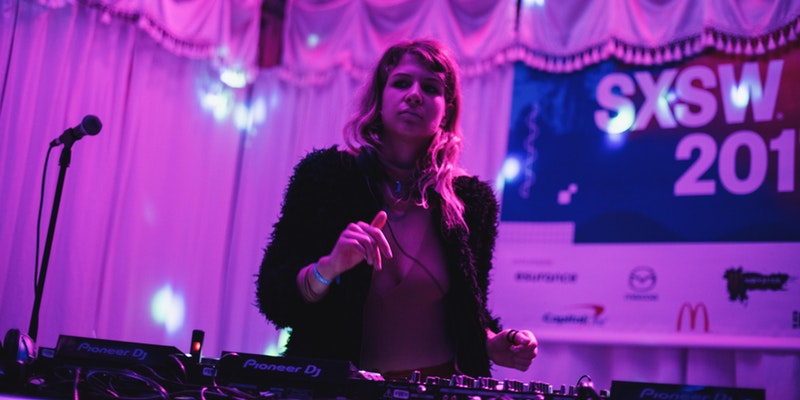 Evening program from 6pm till 2am is only accessible with:
Music Badge, Platinum Badge, Film Badge, Interactive Badge.

After the two shows of The Living Museum, they will present a night filled with music!

11:00pm – 11.40pm
Lex Empress
Be prepared to be blown away by LEX EMPRESS! Whether it’s hosting huge stages like Mysteryland worldwide or singing for 40.000 people at Sensation, Lex Empress can pull it off with an ease that is rarely seen. She is a brilliant songwriter & producer for dance as well as jazz and at the same time she is a star improviser.

​With the brightest voice, stunning looks and warm personality she is travelling the world with the microphone in her hand.

12:00am – 12.40am
Chagall
Chagall is an in Amsterdam born- and London based electronic music producer, songwriter, singer, performer and early adaptor of the Mi.Mu gloves (wireless data gloves to perform electronic music with gesture).

Inspired by the people around her, nature, ancient, greek poetry, the music of Björk, James Blake, Arca, Tirzah, Beethoven, Nina Simone, Erykah Badu, Joni Mitchell, Miriam Makeba and soooo many others, she writes songs that are deeply personal but underpinned by a sometimes uncomfortable bed of wobbly basses and quirky sounding beats.

In over 50 performances at e.g. Ted, Sonar, Ableton Loop, Amsterdam Dance Event, Greem man and Nesta Futurefest, she has been using the Mi.Mu gloves to physically control the most detailed of electronic sounds while maintaining direct interaction with the audience.

12.45am – 02:00am
DJ Masha
Los Angeles based DJ/producer Masha is a rising star in the house music scene. LA Weekly dubbed her one of LA’s top 20 Djs. Masha is a resident DJ and co-founder of Dig Deeper whose guests include DJ Sprinkles, Axel Boman, Daniele Baldelli and Rebolledo to name a few. She has a monthly NTS Radio show called “Beyond the Clouds.” Her DJ sets sets blend raw underground sounds, classic deep house and eclectic disco grooves. Always digging deeper, she finds a way to surprise the audience with quality music for open minded people